The British Solo Percussionist Dame Evelyn Glennie is next year’s recipient of Denmark’s biggest music prize, The Léonie Sonning Music Prize. Glennie, who despite being deaf has established a unique and impressive career, will receive the esteemed prize during a special tribute concert in DR Koncerthuset on the 15th of June 2023, with several affiliated events taking place in collaboration with DR and music conservatories across the country, among others.

“Evelyn Glennie is a pioneer. Since her breakthrough in the 1980’s, she has been the first to establish a full-time career as a solo percussionist. With her more than 200 specially commissioned pieces and eclectic collaborations with a wide variety of musicians and contemporary composers from Scotland’s James MacMillan to Iceland’s Björk, she completely transcends boundaries. Through her development of extreme bodily awareness, this has enabled Evelyn Glennie to perform as a professional musician at the highest level – despite losing her hearing from the age of 8. She has gone on to broaden the understanding of music and how we listen to music.”

In addition to her career as a solo percussionist, Evelyn Glennie has also established herself as a composer. She is the first percussionist awarded Dame Commander of the British Empire in 2007. Her career is documented through her award-winning film Touch the Sound and her book Listen World!

Celebrations in February and June 2023

As the recipient of The Léonie Sonning Music Prize, Danish audiences can look forward to experiencing Evelyn Glennie when she visits Denmark on several occasions during 2023. During this time, the audience will be able to experience the multiple facets that have contributed to
Glennie being chosen as the prize recipient. Already on February the 18 and 19 , it will be possible to meet Evelyn Glennie as she will partake in a conversation with radio host and music presenter, Bendikte Granvig, about how she, as a musician who is deaf, listens with her whole body. The conversation, which also includes musical demonstrations, will take place at the DR Koncerthuset in connection with the performance ‘For Deaf Ears’, and is organised in collaboration with OperaNord and DR Musikariet.

At the award concert on the 15th of June 2023, Glennie will perform as a soloist in the company of the DR Symphony Orchestra, where they will perform among others James MacMillan’s iconic Veni, Veni Emmanuel for percussion and orchestra. The evening also offers a very special tribute to the recipient, when 35 professional and student percussionists from across Denmark pay tribute to the award winner with a specially commissioned piece in DR Koncerthuset. The day after the award concert, Evelyn Glennie will give an artist talk and a masterclass at the Royal Danish Conservatorium. 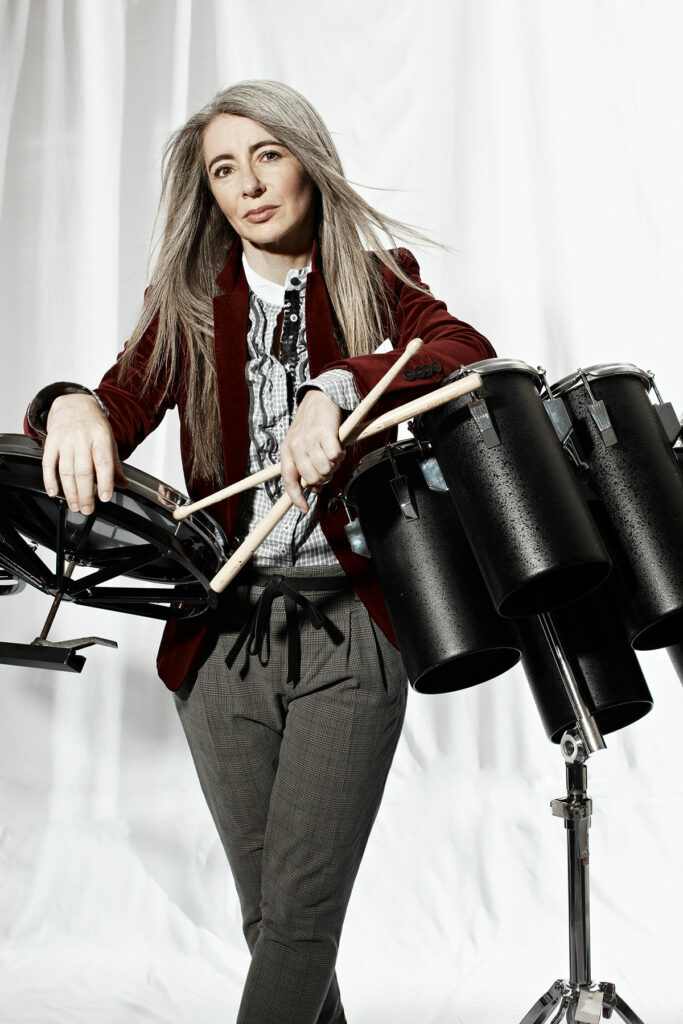 Refused to attend a school for the deaf
The story of Evelyn Glennie significantly stands out from other musicians. Evelyn Glennie was born on a farm outside the city of Aberdeen, Scotland in 1965. Yet the unusual story only begins at the age of eight when she had problems with her hearing. At the age of twelve, she was profoundly deaf. Also at this age she was introduced to percussion. However, Glennie refused to let her deafness define her life. She chose not to go to a school for the deaf. Instead, she went on to become a professional musician. Glennie taught herself to lipread and trained her musical experience and understanding by feeling the resonance of music throughout her body. This resulted in Glennie joining the Royal Academy of Music, London at aged 16 before she embarked on her career as a soloist. One of her distinct characteristics when performing is that she often performs barefoot, to be able to get the feeling of the vibrations that the music provides.

“When the vision of being a solo percussionist formed in my mind at the age of 15, never had I imagined that it would take me on an unforgettable journey. The experience of collaborating with composers, orchestras and so many other creative spirits over the years fills me with immense gratitude. The feeling of still being inspired and curious is fueled by the many people whom I meet, work with and the many experiences that come my way – planned and unplanned. Inspiration is all around us but sometimes we need time to reflect on where we have come from, where we presently are and what our hopes are for the future” Glennie explains.

The Léonie Sonning Music Prize has been awarded since 1959, where the influential composer Igor Stravinskij was the first to receive the prize. Since then, the music prize has gone on to become Denmark’s most important Music prize. This year’s recipient of The Léonie Sonning Music Prize was the French pianist Pierre-Laurent Aimard. With the award, comes 1.000.000 Danish Kroner. Glennie is honored to receive the award.

To be the recipient of the 2023 Sonning Music Prize is simply one of the greatest honors in my journey. I humbly try to do my best in all I embark on, always aiming to learn from each experience. To receive this Prize has allowed me the opportunity to pause and reflect. Most importantly, the Prize reflects real celebration and inclusiveness. This is so important, and I’m delighted that the next generation of creative minds are able to participate in the celebrations of this extremely special Prize”.

The collaboration between DR and Léonie Sonning’s Music Foundation is a source of joy for the head of the DR Koncerthuset, Kim Bohr, who is looking forward to taking part in the celebration of next year’s prize winner:

“Evelyn Glennie is living proof of how important music is to us as human beings and how deeply it is rooted in our bodies and minds. We are delighted that DR Koncerthuset and Léonie Sonning’s Music Foundation can together provide the setting for a wide-ranging musical tribute that reflects the award winner’s versatile and creative nature. Literally every corner of Koncerthuset will be in play as we invite audiences to both artist talk, the music performance “For Deaf Ears”, a tribute concert and award ceremony – in close collaboration with DR Musikariet, P2 and conservatories across the country.”

Evelyn Glennie’s history with Denmark dates back many years and she has previously been praised for her performances in Denmark.

In November 1995, Evelyn Glennie had a concert with the pianist Philip Smith at the Louisiana Museum of Modern Art. During that occasion, Jens Brincker in Berlingske Tidende wrote “The British Evelyn Glennie is a phenomenon… with bare feet solidly planted on the ground like antennas, she stood in the concert hall of Louisiana and could sense the vibrations from the marimba in her body. She transformed this into rhematic tensions and impulses…rarely do you experience modern compositional music played with such a physical presence and charisma.”

Evelyn Glennie was one of the first percussionists that made use of the Danish developed percussion instrument the Aluphone and used it during her performance for the opening of the Olympics in London 2012. In January 2014, Evelyn Glennie premiered Anders Koppels Concerto for Aluphone (doubling Marimba) and Orchestra during two sold-out concerts with Odense Symphony Orchestra. There is now a model specifically called the Glennie Concert Aluphone.

In addition to several concertos by Anders Koppel, Evelyn Glennie has also been a soloist in percussion concertos by Per Nørgård and Poul Ruders.