The music prize over the years

Apart from the music prize itself, the foundation has in many instances helped finance the prize-giving concert, where the participation of the prize-winner is remunerated in the usual way by the concert organiser.

The handing-over of the prize has taken place in Copenhagen with three exceptions:

In 1971 Arthur Rubinstein received the prize at a concert in Holstebro; in 1981 the prize was awarded to Mstislav Rostropovich in Odense in connection with a master-class at Egeskov Castle; and in 1990 the prize-giving concert was past of the Numus Festival in Aarhus, at which many of György Ligeti’s works were performed. 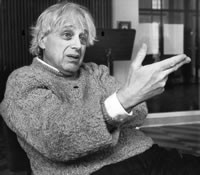 The foundation has often mediated and supported the appearance of prize-winners or performances of their music over and above the actual prize-giving concert, and has also in other ways expanded activities related to the prize-giving ceremony. The prize-winners are always asked to help at a master-class or some similar event of importance for young Danish musicians. This is often agreed to, although unfortunately not all the prize-winners have had the time.

In 1976, the foundation co-funded a commemorative concert for Dmitri Shostakovich on the occasion of his 70th birthday.

In 1977, the foundation arranged, for example, for the publication of ‘Messiaen – a handbook’, written by Poul Borum and Erik Christensen. 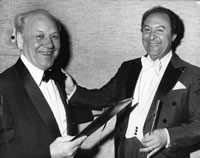 In 1978, the foundation commissioned from Erik Norby a work Capriccio for Flute and Orchestra, which Pierre Rampal gave the first performance of and recorded for the gramophone, together with Carl Nielsen’s Flute Concerto.

In 1980, Ib Nørholm, commissioned by the foundation, composed Idylles d’Apocalypse, which was first performed by Marie-Claire Alain and issued as a gramophone record along with another work from the prize-giving concert, an organ concerto by Jacques Charpentier.

In 1982, Isaac Stern worked for two days with students from The Royal Danish Academy of Music, and in 1983, Rafael Kubelik worked in a similar way with the orchestra of the academy, concluding this with a concert. 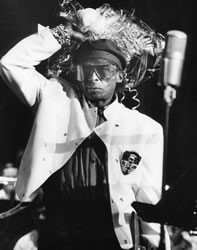 In 1984, the foundation commissioned Palle Mikkelborg to write the composition Aura, which was given its first performance and later recorded for the gramophone with Miles Davis as soloist.

In 1985, the foundation paid for the publication Pierre Boulez, composer – conductor – utopist, edited by Mogens Andersen and Mogens Wenzel Andreasen.

In 1985, there was a seminar for students of composition at the academy with Pierre Boulez, and in 1987 with Heinz Holliger.

In 1991, Eric Ericson worked for several days with Sokkelund Sangkor in the presence of young choir conductors, concluding this with a workshop concert.

Furthermore, Krystian Zimerman held a master-class at The Royal Danish Academy of Music in 1994, and in 1995 the foundation sponsored Poul Ruder’s composition for viola and orchestra, which Yuri Bashment gave its first performance at the prize-giving concert. 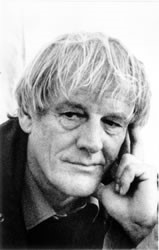 In 1996, the foundation commissioned a work by Per Nørgård, Concerto in due tempi, first performed at the prize-giving concert. The foundation also co-funded the publication of The Music of Per Nørgård: Fourteen Interpretative Essays, edited by Anders Beyer.

When Sofia Gubaidulina received the music prize in 1999, the foundation had actually commissioned a new work, but Gubaidulina did not manage to have sufficient time to complete it. On the other hand, there was, as the press wrote, ‘a veritable Gubaidulina fever in Danish music life’ and the foundation financially supported a documentary about the small, but great composer.

Likewise, the foundation financially supported a TV film the following year about Michala Petri, who received the music prize in 2000.

When György Kurtág received the music prize in 2003 and visited Denmark, music life here almost boiled over with Kurtág enthusiasm.

The foundation contributed to several important concerts featuring Kurtág’s music – including the Esbjerg Chamber Music Festival, which had Kurtág’s music as its leitmotif, a concert at Louisiana, where Maria Husmann and András Keller gave the first performance of Kurtág’s Kafka Fragments and an important concert in Radiohusets Koncertsal with the Athelas Ensemble. At The Royal Danish Academy of Music, Kurtág spellbound a packed concert hall with a master-class where he instructed the Paizo Quartet.

At the prize-giving concert, there was the first performance of an orchestral work the foundation had commissioned, György Kurtág’s

…concertante…, a moving masterpiece that has since been played at many European venues.

Sir John Eliot Gardiner conducted, among other works, Carl Nielsen’s Funen Springtime when he received the music prize in 2005 – and several days before the concert he spoke and answered questions about the practice of conducting in an auditorium crammed full of students at teachers at The Danish Royal Academy of Music. At that same venue, Yo-Yo Ma held a master-class the following year with three young Danish cellists before receiving the music prize.

Arvo Pärt had composed new music for the prize-giving concert in 2008 – These Words… is the name of the work, one of the four works by Pärt performed at the concert.

Three further conductors received the music prize after John Eliot Gardiner. First, the Danish baroque specialist Lars Ulrik Mortensen, who gave the prize-winning concert on the old stage at The Danish Royal Theatre with his Concerto Copenhagen as well as solo concerts organised by the music foundation at various Danish venues. After him came Daniel Barenboim (2009) and Simon Rattle (2013). In 2011, one of the new music’s greatest composers – Kaija Saariaho – received well-earned recognition, and with Jordi Savall (2012) the prize went to yet another of the great artists of early music, who with his musicians from a number of Mediterranean countries was paid tribute to in Trinitatis Church by an enthusiastic audience. Savall also gave a master-class with young Danish baroque musicians at The Royal Danish Academy of Music.